The Earth is Round But Your World is Flat 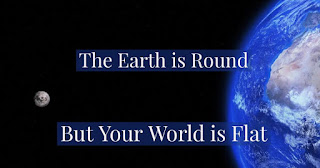 This may be one of the truest things I’ve ever written but it will probably get the least amount of attention.

Usually when I write about useless things it gets laughed at and shared 100 times but when I try to write about how your life online isn’t real, or any other fact like that, it gets ignored completely.

I think the reason for that is because people don’t want to be told how things really are. They want to laugh at silly cat videos or argue with some guy they met one time at a baseball game over whether the color red is better or the color blue is better.

Who knows though, there could be many reasons aside from just that one.

Anyway like I said in my premise, the world is flat. At least yours is. If that comes as a surprise to you then you’re not really paying attention and you’re actually proving the point of my entire article. Although I guess I’m kinda proving it by writing it online...oh well.

What do I mean?

Well first off we are so distracted by technology and synthetic things that bring us closer and closer to the obscure in this world.

We can destroy humanity with the touch of a button.


"The Earth is round but your world is flat."

We mindlessly waste our life away in a virtual world that gives us nothing but negative empty feelings. Meanwhile your flat world goes about without you physically present in it.

Just today I saw a lady at the park who sat on a bench completely absorbed in her virtual life on her phone while her daughter desperately tried to get her attention from 20 feet away to show her a frog she found. After multiple attempts the little girl gave up and went about her play time.

That woman’s world has never been more falsely connected while being so truly disconnected. She thinks that her virtual world is making her more connected when the reality is that she’s forgetting what it means to look up and around you.

Your everyday world is only about 1 square mile of space. You can’t see the curvature of the Earth, the horizon is smaller than where you see the sun setting, and the people in that little tiny space of flat world need your attention more so than the virtual ones on the other side of the globe.

Sure they’re real people too, with the exception of that rich prince who wants you to inherit his fortune if you’d only give him your bank account information. But they don’t need you as much as you’re needed in your flat world community.

We need to stop worrying about whether the Earth is flat and start acting like our world is because that little girl at the park deserves better and the only way she gets that is by landing back in the real world from the virtual space.